What’s more devastating for a little lad—who has just made a new discovery via Majesty Begetarian he can proudly introduce to his town, Dewberry; especially the idea that would rid his fear of having to face the Tick Trefoil beast ever again—only to find when he arrives home that evening, his family has locked him out?

Feeling no longer wanted, nine-year-old Brewnie is left no choice but to face the world alone beneath the feet of humanity. While in hiding, among treacherous plants and hungry predators, he learns of a scheme being plotted, one that could possibly destroy all the villages in the world—including Dewberry. His desperation to escape the danger of the woods leads him into the hands of a pirate queen who wants him sacrificed. In fear of losing his life, Brewnie desperately offers to reveal his secret which in turn lands him a merciful reward. It seems as if Brewnie has finally accepted this new life for himself until he receives startling news that leaves him no choice but to face his greatest fear—the beast of Tick Trefoil. The virtues of love, loyalty—and forgiveness—are tested as he realizes saving his own family means saving his whole world.
Legend of the Dewberry Harvester is a one-of-a-kind children’s story that opens many chapters with narration via factual information from various resources. The fascinating educational slant is intertwined into the narrative, while the characters, although common insects, are each presented with a fresh and unique twist, as each one is full of life with signature traits that not only aid in the flow of the story, but even charm adult readers as well.

Jan Ezelle, native of Mississippi, is a graduate of The Institute of Children’s Literature: Writing for Children and Teenagers. She is also an artist, homemaker and ‘Gran-Jan’. She hopes to see her writing serve as an inspiration for both children and adults alike, especially those who feel they suffer some sort of disability. “No one should let obstacles—or fear—stand in the way of achieving their dreams,” states Ms. Ezelle, who is facing obstacles herself. “Rather than focus on what I couldn’t do, I had to focus on what I could do.”

Buy Now
We use cookies on our website to give you the most relevant experience by remembering your preferences and repeat visits. By clicking “Accept”, you consent to the use of ALL the cookies.
Cookie settingsACCEPT
Manage consent 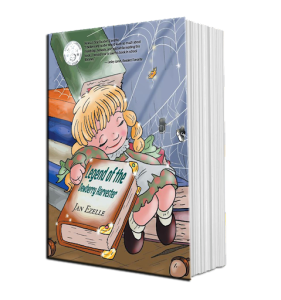